The history below contains excerpts from Trinity’s Wikipedia entry, authored by Parish membership.  Click here for an extended history of Trinity.

Trinity Episcopal Church is a historic Episcopal church building at 124 N Mulanix Street in Kirksville, Missouri, United States. Displaying an eclectic style, it was placed on the National Register of Historic Places in January, 2008.[1] The church building is the second-oldest in Kirksville to be in continuous use by a congregation.[2] 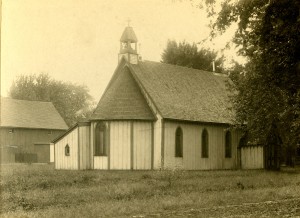 1870, when first established as an outreach mission.[3] The first church building, a wooden structure, was constructed in 1870 on the site of the current church and served the congregation until 1916. A fire in 1907 caused major damage and despite repairs it was apparent the original building would not remain usable.[3] In October, 1915 the congregation petitioned the Episcopal Diocese for assistance and were successful in reaching an agreement on financing.

Well-known local architect, and congregation member, Irwin Dunbar was selected to design the new building and during 1916 the former wooden structure was razed to clear path for the new church.[3] Construction was begun in the spring of 1917 with the local firm of Eggert & Russel chosen for the task. The cornerstone was laid on May 14, 1917 and building progressed rapidly with the consecration of the new church on November 7, 1917. Total completion cost for the project was $11,555, the Diocese contributing $5,500.[3][4]

The building was constructed in a bungalow/craftsman, Gothic Revival style with the finished dimensions approximately 37 feet by 67 feet.[2] With the 1907 fire still fresh in their minds, the congregation chose the slightly higher cost of a brick structure as opposed to wood. The building is somewhat asymmetrical in nature and sits atop a raised basement.[1] When designing the interior, Irwin Dunbar chose some features that reflected not only a blend of Craftsman and Gothic Revival styles, but his own background as an engineer. Most notable of those are the open beam ceiling in the nave, constructed of black walnut.[2] These trusses provided support for the heavy English tile roof, yet kept the worship area free of cumbersome columns. Black walnut was used extensively throughout the interior for trim, window frames, and other ancillary features.[3]

The sanctuary portion of the building today is very much as originally designed and constructed. Only one significant alteration, the replacement of a section of flat roof with an inclined one in 1998, has taken place.[3] Save for minor upgrades in electrical, plumbing, and HVAC, the interior is also largely untouched.

An addition was made to the building in 2015 to provide greater accessibility, accessible restrooms, and easier movement between the sanctuary and undercroft.  The design by architectural firm Chinn Rother, and Associates of Columbia, Missouri, was meant to provide some sense of continuity between new and old sections of the building while clearly delineating those sections that were part of the original historical structure from those which were new.  The design beautifully weds new and old while opening the facility to many who could not otherwise access the historic building.  New accessible parking was also added on Harrison Street.  For more information about the recent accessibility building project, and pictures of construction, click here.